Since working remotely I have discovered that I now can be very productive in meetings. That is in pointless meetings I can write this post. FYI somehow I uploaded really large images. Give the browser a min to load them all before scrolling down. Feels like dial-up, super annoying sorry.

I am new to the hobby. I started cycling my tank in May of 2019 and since have blown more money than on my undergrad. I move around a lot and live in modest sized apartments so small size is the name of the game. My first tank was a 20 gallon NUVO Fusion (link) which is a nice all in one tank & my second is a DIY lagoon. 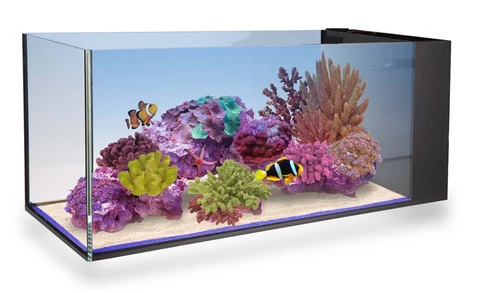 The 20 gallon was great but I moved again and so I can only have one tank and chose to keep my lagoon. I am now a big fan of lagoons because it allows me to tinker with the tank every day. Don’t like where the rock is? Move it. Sand is getting dirty? Get some chop sticks and stir it. Rocks are collecting dirt? Take a syringe and clean them. 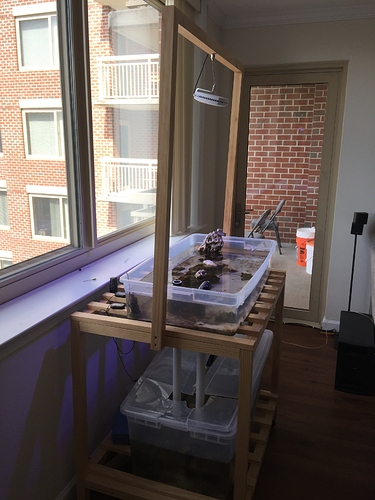 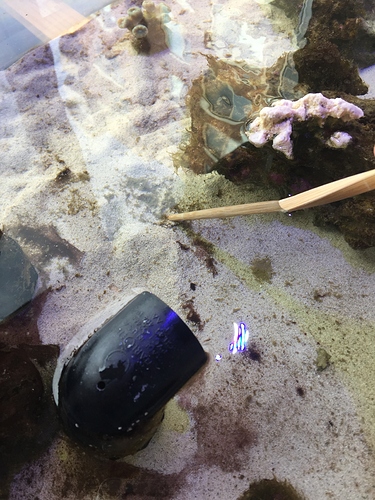 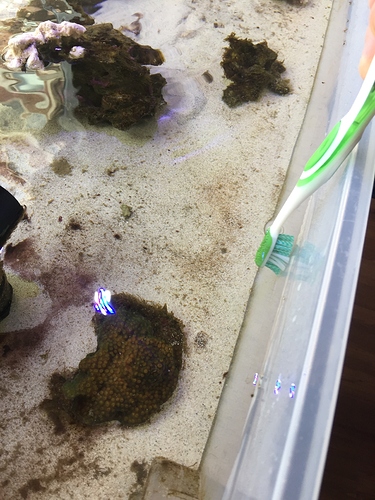 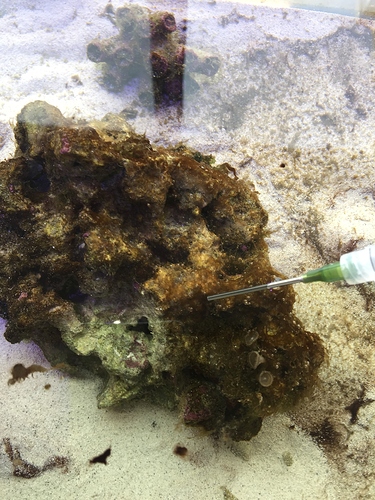 Also, I can directly feed the fish and the coral which keeps down on unnecessary waste in the tank. Finally, it is just cool to look down on the tank. It gives the feeling that you are actually walking on the beach looking into the water. 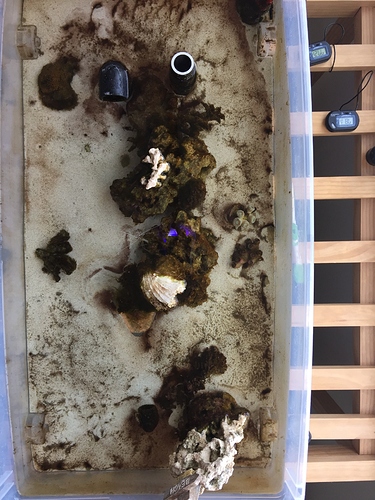 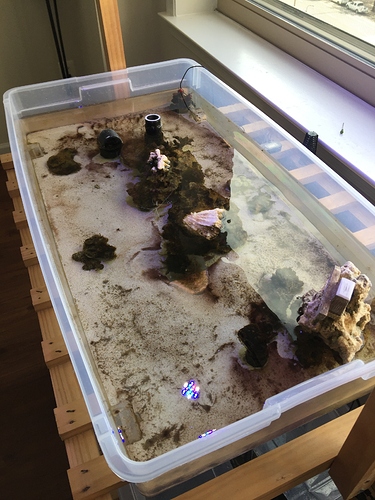 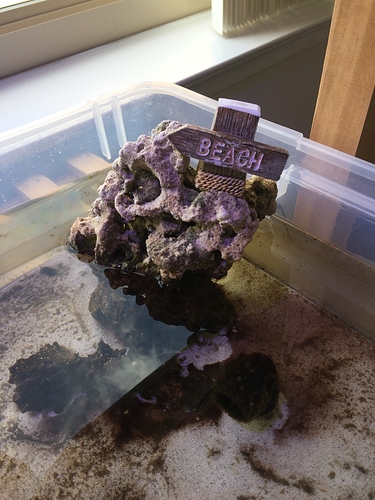 When building the lagoon I had two main requirements. First this tank would be as natural as possible. No skimmers, dosers or other expensive equipment. This led into my second requirement which was to build a very economical tank. I can always upgrade.

I actually modeled the tank after hydroponic systems. They are the only other systems that use simple, cost effective materials & rely on natural filtration. So instead of heavy expensive glass I used Sterilite containers. Yup that’s right, my tank is an oversized lunch box (link, link). These were bigger containers like the ones you would put shoes in and roll under your bed. 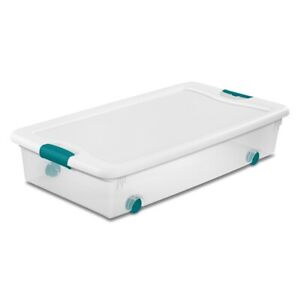 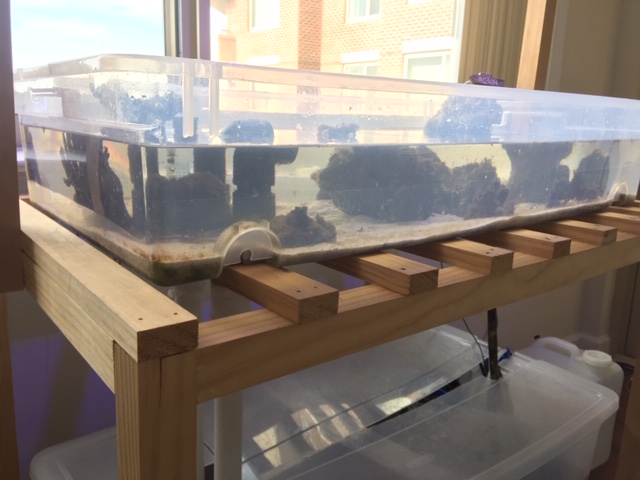 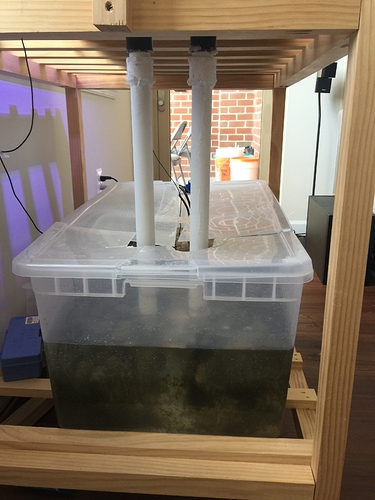 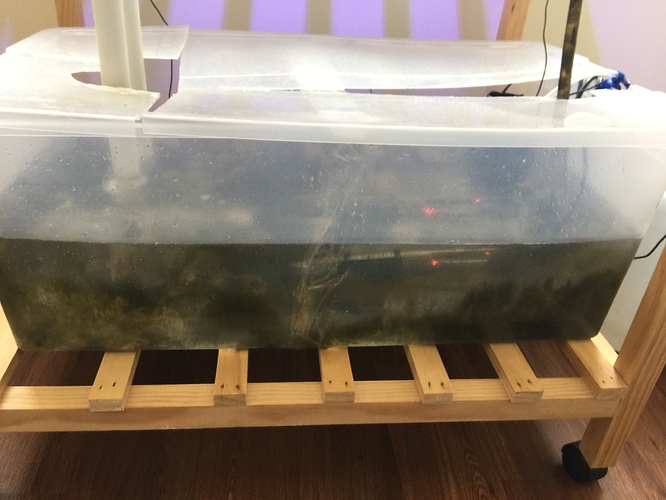 Both the lagoon and the reservoir are clear plastic which gives a cool effect as it appears like there are two tanks. Because this was a DIY and I could not find anyone else that was stupid enough to use Sterilite from Home Depot I went through like ten different containers. & because I used Sterilite that is not filled to the top I do not know how many gallons are actually in the tank. I guesstimate 24 gallons.

The main issue was paring the pump with the size of the tank. I use a generic submersible pump so I can’t really dial it in. My first few containers were two small and the pump created too much flow. Then I had to re-adjust the plumbing so that it did not cause the lagoon to overflow, but still created enough circulation. The lagoon is very shallow so I cannot use a powerhead because it will shoot all the water out of the tank.

I then built a custom stand with premium wood, stained to the color of cherry. I included a large arch (technically square) to hang a light. This was supposed to be a prototype, but I ended up keeping it. 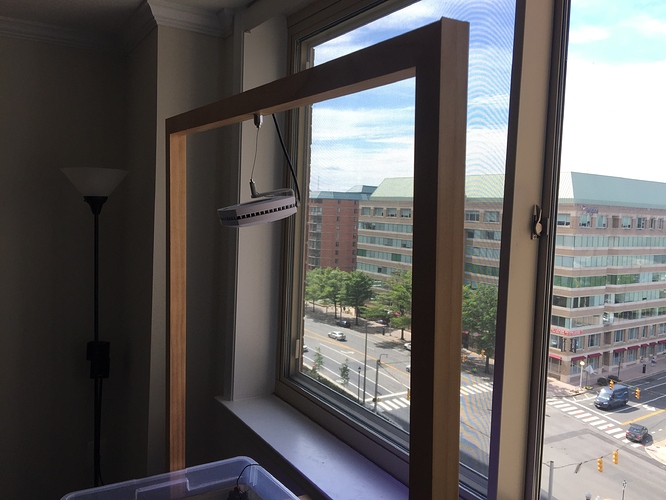 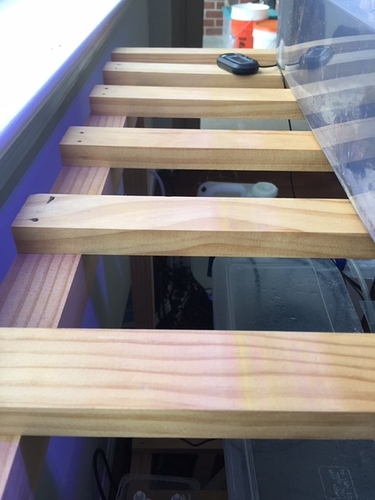 I put the floor of the stand high enough so that my robot vacuum could go under it and clean. This turned out to be a good idea as dirt always collects around stands. Mine just looks clean. The single best thing about this stand is I put it wheels on it. I just got standard office chair wheels (link). 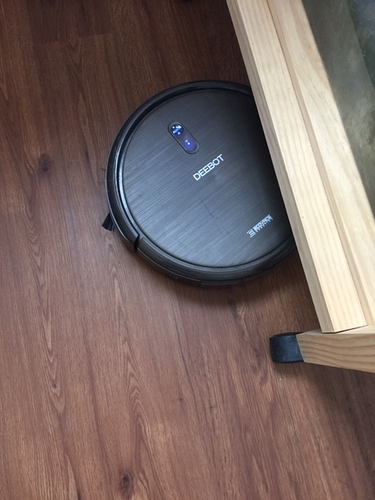 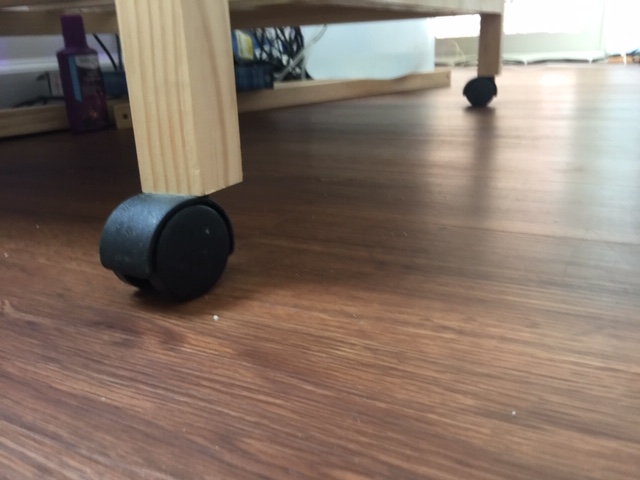 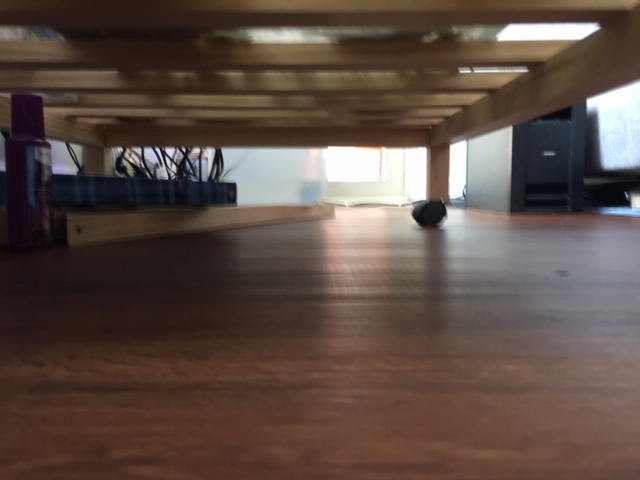 I cannot stress how awesome this turned out to be. No more squishing your face against the back wall to try and see. No more trying to reach a power cord by straining your arm to the point you think it’s going to pop out of joint. You have to be slow and deliberate when moving the tank but I can re-wire, re-plumb and a host of other tasks with ease. I am certain everyone can think of something they do not do because they cannot access the back of the tank. 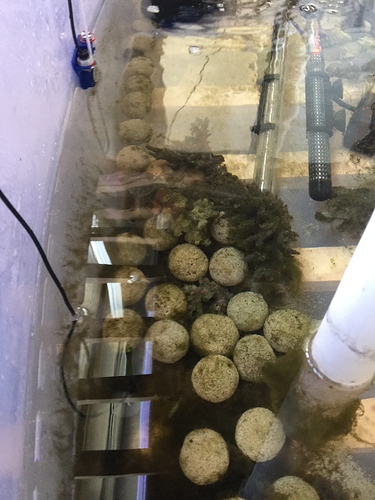 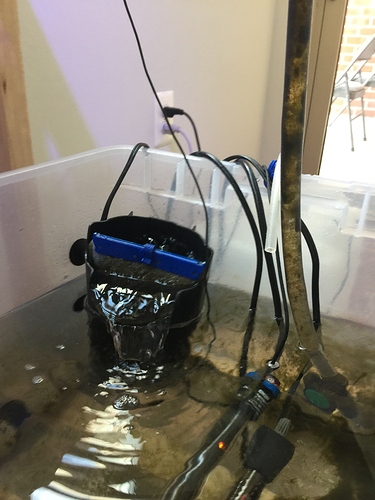 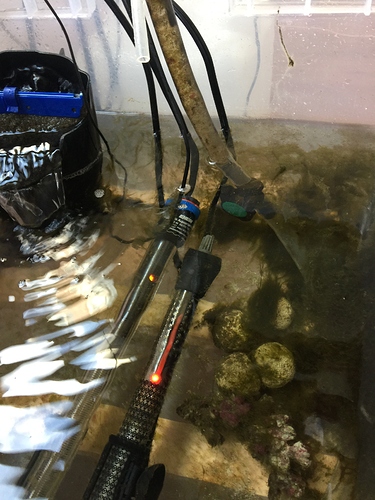 I have a generic pump in the reservoir along with a whisper in tank filter. I purchased an AI Prime HD which ended up being more expensive than the rest of the tank put together. I eventually got an IceCap ATO (link) so I could take a vacation. I went through five different heaters and eventually purchased an Ink Bird controller (link). I was very opposed to the ATO and the controller because I wanted to keep the tank economical. However, I want the convenience of traveling plus the heaters broke and wiped out my tank so I gave in. 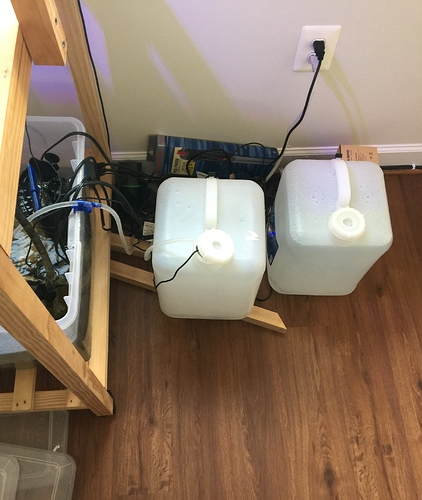 I am happy to report that all of my levels are perfect. Nothing beats natural filtration. Also because it is a shallow lagoon I use very little food. My fish (RIP) come out of hiding to be fed. I sprinkle in flakes slowly until they stop eating so there is very little waste. I can/could hand feed my shrimp and the two clown fish which was really cool.

My tank is next to a window. My coral like the natural light far more than my $250 light…yup hundreds of dollars in lights and they like the Sun better…jerks.

Because the lagoon is so shallow I can aquascape with rocks sticking out of the water. This gives another cool coastal look.

I clean the tank walls every day with a toothbrush!

I live on the 9th floor of a high rise and you can see the AI Prime from the street. Out of 100+ windows mine is blue lol.

When I have fish, and I come to the tank they circle the same location waiting to be fed. They look like sharks before a feeding.

Because the reservoir is clear plastic algae started to grow in it creating a natural refugium.

At the end of this post I decided I wanted to re-aquascape the tank. Because it’s a lagoon I did it in 60 seconds. 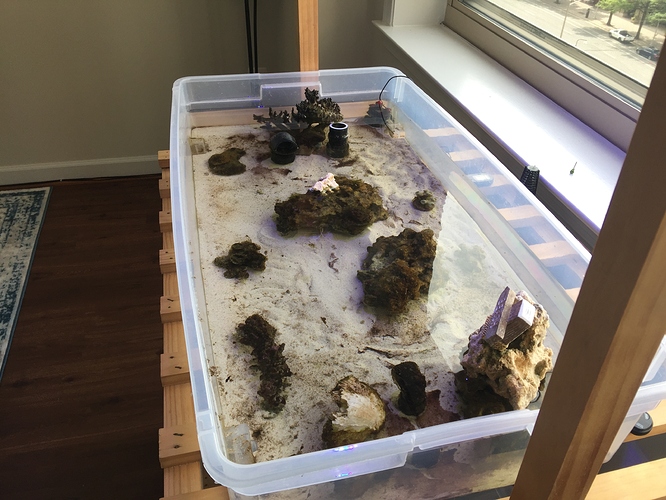 These are my coral: 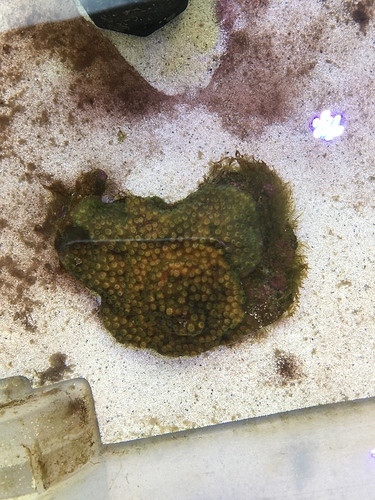 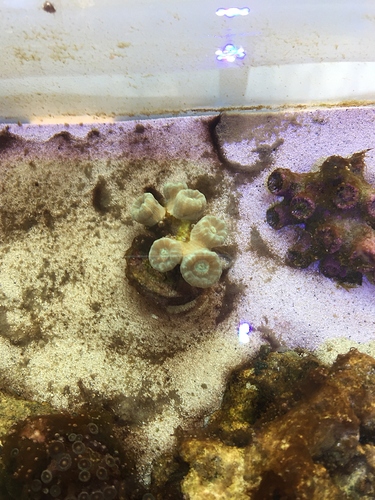 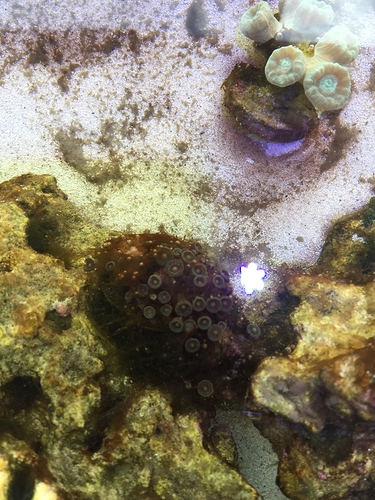 This is Francois, the last non-coral creature to survive the great crash of 2020. 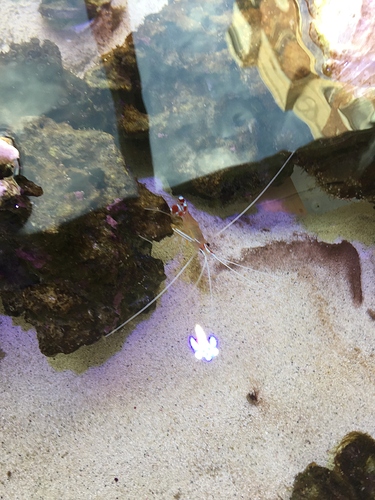 Welcome to the posting side of the forum. Thanks for sharing

Give the browser a min to load them all before scrolling down. Feels like dial-up, super annoying sorry.

Our images get served by Cloudfront (a content delivery service), but it takes about 20 minutes before the files show up there. They can be a little slow when you pull them directly from our server until then. They loaded in a flash for me

I’ve always loved the look of super shallow tanks. You can really appreciate all of the colors when you’re looking straight down on everything. Reminds me of diving on reefs. I’ve never seen anyone use a rubbermaid container to make one though. So kudos to you!

Sorry about your crash, but congrats on staying with it! I’m looking forward to seeing the tank grow out.

Interesting build and appears to be working. I also like the shallowness. Just puts off a calming feels. The location in the room is nice as well.