So this has been my favorite fish and as a juv it was great. I have had him about 1 year purchased from frags to fishes. I originally quarentined 4 weeks and its been in my 45 jbj AIO since.

At this point it has maybe tripled in size. And is just too big. Not only is space and issue, the feeding and poops are too much for my system. Reef safe with caution which I would say as a juv. Yes its reef safe. After it grows some about 6 months oh yea it will eat corals. Anything with a polyp or soft tissue. Most stuff he will just try but this fish is best in s fish only.

A few things, really the next home should be 150g or more. This guy can grow up to a foot. He is starting to turn colora. In the next yeah it should go from blue and white stripes to all black.
I currently feed him angelfish food its like frozen claims and coral every other day and then myais the other days. Then once a day I feed flakes.

The one thing is I’m not sure how to get him out. If anyone is intersted it would be great if you could help. I will be upgrading my tank next year so eventually he will come out. But I’m willing to let him go free if you can catch him or something. 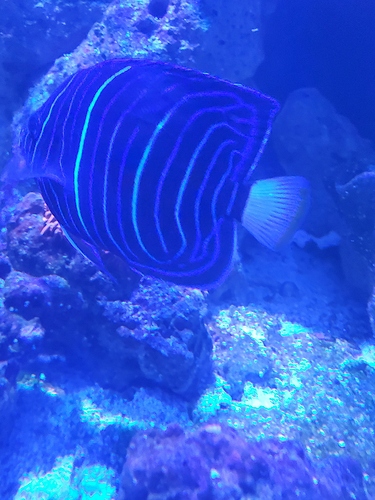 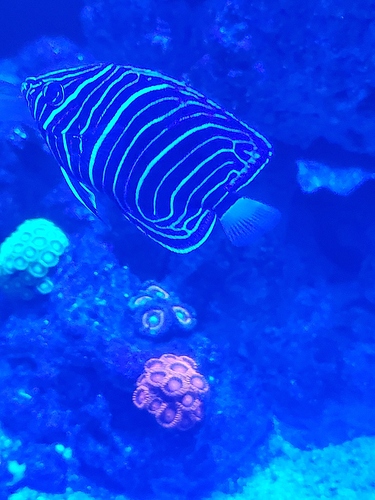 I would love to have him. I currently have a 125. He should be fine in that. We could trade some frags for him or would you like some rainbow bubble tip enemones for him. As for catching him, I have a fish trap if you would like to try?

Awesome, I have a pretty big trap but I think th fish is too big. Buy I can try a few things. Ill message you directly regarding more details.

A good home has been found. Thanks Mike

The pleasure is all,mine. You have a lot of free frags coming when you get your new tank set up. Thanks

How’s your tank doing? Ready for any frags yet?

Hey Mike, yes I believe it is. My current corals have taken off this last month so I am finally doing something right and things are stable.

Any idea when you would be free next ?

Any time is good for me. I’m home the next 2weeks. Day time night time whatever. I won’t be here this Saturday. Let me know what works for you.