Thanks, any help helps. I hate to inform everyone that while the nem was recovering in a new tank it was killed by the power head. The slots ,which are smaller than those I see on 3d printed anemone guards for pumps, were just big enough I guess. You know the rest. Thanks for the help and advice as this all can help when moving forward with more anemone keeping. Other nems are doing great. I think the original reasons for its decline was lighting and maroon clownfish it was hosting.

You mentioned other nems. Do you have different types in your tank by any chance? I have heard alot of the higher end ones even though they are basically a rainbow do not mix well and tend to melt.

I did have 2 large green BTA’s die/disappear when I tore the biocube down for home renovation. Put them in the 20 long with the AI Prime, but next morning they were gone, no idea what happened.

Bubbletips have some kind of chemical warfare when mixed with other types of bubbletips. Kinda like Yuma shrooms can wipe out other shrooms just being in the tank. Its good to run carbon with anemones and shrooms to keep the chemical warfare to a minimum.
It is strange what you went through and hopefully it’s just a fluke incident.

had nothing to do with the rainbows as they weren’t in the biocube (the biocube was actually torn down during home renovations) and the rocks, fish, nems were in the 20long…the rainbow BTA was in the 120.

I have found holding tanks are very very hard to keep. when i tore down the 120, the stuff was in the 40 breeder while i cleaned/cycled the rocks…the alkalinity was probably under 6, the calcium was about 300, which wiped out the corals except for the stylophora. I have since discovered that I don’t have a proper setup for a coral quarantine, but for a fish holding/observation/qt, what i have works just fine

It happens, as long as you learned something all is well

Kenya tree is a very easy coral to keep. So I don’t see any problems at all with the tank or light you mentioned.

Just be aware that once you put a Kenya Tree in your tank, it often takes hold like a weed and it will grow and grow.

@JustSumGuy thanks for that.
@TheProfessor. That i am worried about. Is this true for all types of tree type corals?

I may just tear my 10g down and put everything in my 40 breeder which I plan to grow out corals for my main display. Not sure I would want something spreading around to fast in there.

What do you think about anemones in there. Would they harm the corals ?

Once the leather trees take foot they drop babies like crazy in my past experience. Same with devils hand leathers once it gets so big they like to drop little bundles if joy.

And I don’t think Jeff and I are discouraging you from keeping Kenya or other leathers. You just should know what you are getting into.

My example is Pocillopora. I put a very nice chunk of green pocillopora in my display. It was lovely. Only problem: it got really happy and starting dropping polyps all over the place. Now I have a pocillopora infestation in my display. It’s more or less impossible to get rid of and it often kills nearby corals that i am trying to keep. I took the mother colony out, but I still have a ton of it in the tank and little polyps spreading all the time. It’s a cool coral but also freaking nuisance. I hear Kenya is the same way. That may be good if you like it. I just wish I had been aware that pocillopora does this.

I try and stay away from those types like gsp and xenia just because if its gets out of control there is no way I can stop it. I like these things but may have to pass just because of that. While it may look nice in my main display.I have 2 angelfish in there that may eat it. Being a fast grower i could potentially keep growing out more in my grow out tank and replacing it. But I am not sure that is healthy. I have read they will eat any coral. Right now torch, zoas,birds nest, nem, and stylo are holding up. But they like favia and I think they would love some tree lol. I’m just getting bored and looking at things that I really shouldn’t get. I do not want to add anything to the main display unless I have a back up in case the angels eat it.

Take a look at some of the other leathers. They don’t multiply like crazy and some are super nice looking. I’ll grab a picture of the branching leather I have in my tank. It’s super bright green and has some really nice movement.

Toadstool leathers are great too. You should see the insane one that @Jessica has in her tank. Could you post a picture of it? 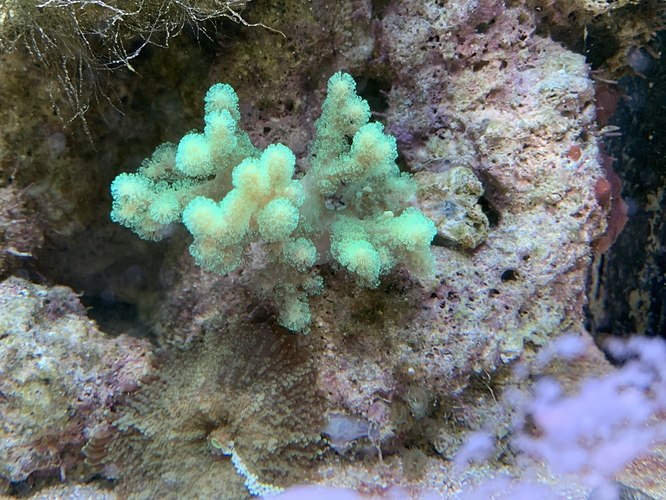 Ok yes I’m interested in something like that. Is that a Kenya tree or its just a branching leather? 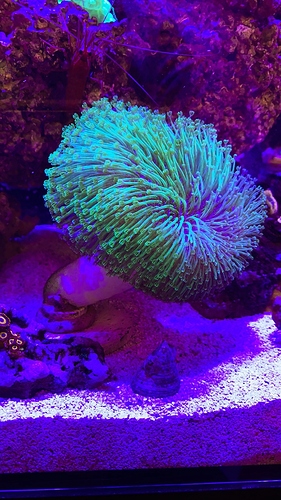 It’s leaning more than usual right now. Its done this before for a few days and then went back to its normal more vertical position.

Yessssssss… that! You should put that in for the Facebook cover contest!